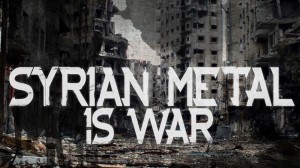 In the trailer, one man voiced the concern that, if metal concerts were made public, someone may come in and “blow himself up among us.” It’s a brutal, powerful statement. Are  tensions really that bad between metalheads and the rest of society?

In general, metal music up to this very moment is unaccepted and not correctly understood in Syria or the Arabian countries, although somehow the same society can accept a video clip from any other musical genre featuring nearly naked girls, explicit sexual hints and degradation towards women with certain terms and swears.

Some people consider metal to be strictly about Satanism, and others believe it to be against religions and holy figures; another group thinks that it encourages “moral decay.” So up to this very day metal music is a music that is fought, and is kept from spreading. Having said that, it is possible that a person who has the belief that metalheads are threatening to shake his faith, religion, and dogma would blow himself up among us, or, in lesser occasions hurt us.

Are there many female metal fans in the Syrian community? As far as you can tell, what is their experience like?

Yes, there is a decent number of female metalheads in Syria, starting with my fiancee who happens to be a doomster. I would say, the experience of female metalheads here is a bit difficult, as they have to face the same suppression they face in our society among their peers and especially from male metalheads which dominate the overall scene (suppression in terms of sexism and  arbitrary prejudgments), but I know a few girls who are really experienced in metal and are able to topple many male  metalheads.